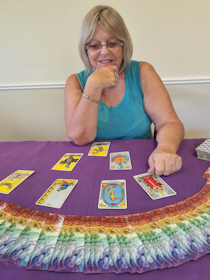 As a child Barbara Jones remembers many experiences with spirit.  Little did she know then just how gifted she was.  Her father died when she was 7 years old and although she knew he was sick, she was sad when her mother came to tell her he had died.  She remembers looking out of the window and seeing flashes of her father.  She heard him telling her he would visit her to kiss her goodnight every night and true to his word he did.

Her life continued as normal.  Her mother was also clairvoyant so they often used to visit the local Spiritualist Church in London where they lived.  It was not unusual for mediums to visit and hold their circle at home.

As a young girl Barbara used to spend a lot of time reflecting on the meaning of life.  She would have long conversations with her mother and the mediums that would visit and was often told that she would be doing their work one day.

Throughout her teenage years Barbara’s interest widened.  She started to explore Tarot and showed an interest in Astrology.  However, as it was the early 60’s and the Witchcraft Act had only been repealed in the 50’s, a lot of the teachings still took place undercover and were certainly not freely available as they are today.

In her 20′s Barbara’s world started to fall apart.  When her marriage failed she found herself looking within once again for the answers, like she did so many times as a young child.  A voice spoke to her, this same voice from the spirit world.  The voice of her father helped lead her back to the Spiritualist Church.  It was here she found so many questions could be answered and it was here that Barbara also discovered she had healing abilities.

A few years later she met her second husband Roy Jones, who was also very Clairvoyant, and together they emigrated to Perth, Australia.  On arrival they decided they wanted to help others also find their way in their spiritual life and to help them get in touch with spirit themselves.  Together they started the Starlight Spiritual Development Centre in 1999 which continued until 2009.

In 2004 her beloved husband passed into spirit.  He is often seen not only by herself but by many people that knew him and without doubt still works with her as her work continues to grow stronger and stronger.

Barbara’s main purpose in this lifetime is to help others find themselves and to connect to spirit .  Her love of healing also comes through in her readings and for this reason she is often referred to as ‘The Tarot Therapist’